Prize Winners of the Paul Ehrlich and Ludwig Darmstaedter Prize 2009 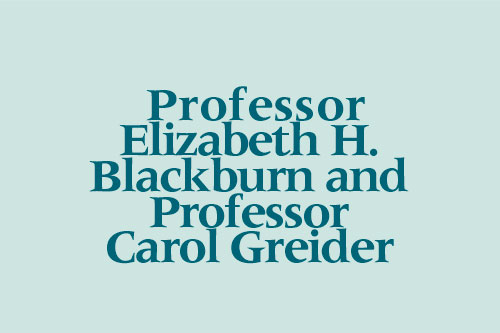 Discovery of telomerase and its role in aging

Professor Elizabeth H. Blackburn a biologist from the Department of Biochemistry and Biophysics of the University of California, San Francisco, USA, and Professor Carol Greider a biologist from the Department of Molecular Biology and Genetics of The Johns Hopkins University in Baltimore, USA, received the 100,000 euro Paul Ehrlich and Ludwig Darmstaedter Prize 2009 for their outstanding research achievements “in the discovery of telomeres and telomerase and the elucidation of their significance for cell division and cell aging." The decision to confer the award on them was made by the Board of the Paul Ehrlich Foundation. The Paul Ehrlich and Ludwig Darmstaedter Prize is among the most prestigious international awards granted in the Federal Republic of Germany in the field of medicine.

The ends of chromosomes are protected by so-called telomeres (Greek for “end bodies"), which form a cap surrounding the end of the chromosomes, rather like the plastic tip on the end of a shoelace. Each time a healthy cell divides, these telomeres are shortened by a tiny amount. Once telomere length falls below a certain minimum, the cell ceases to divide or dies. The enzyme telomerase discovered by Elizabeth Blackburn and Carol Greider can suppress the shortening of telomeres. After cell division, it adds DNA building blocks to the chromosome ends and so lengthens the telomeres again. Telomerase thus acts to prevent cell aging.

Demonstrable levels of telomerase are found in the human body only in cells that have to renew themselves over and over again, such as skin and mucosa cells – and in cancer cells. The enzyme promotes tumor growth by preventing cell aging and counteracting natural cell death. Telomerase is therefore a central and crucial point of attack for the development of new cancer drugs.

Elizabeth Blackburn, together with her then doctoral student Carol Greider, discovered telomerase in 1984 in ciliate protozoa of the Tetrahymena species and described it for the first time in 1985. In the following years, she characterized it genetically and biochemically in various species, and studied its effects on human health and aging, while Carol Greider investigated the implications of the malfunction of telomeres and telomerase for genetic material, the genomic stability of the cell, and the body.

Professor Elizabeth H. Blackburn was born in Hobart, Tasmania, on November 26, 1948. She studied biology at the University of Melbourne and took her Ph.D. at the University of Cambridge in the UK in 1975. She then moved to Yale University in the USA, before joining the faculty of the University of California, Berkeley, in 1978. She joined the Department of Microbiology and Immunology of the University of California, San Francisco, in 1990 and is currently Morris Herzstein Professor of Biology and Physiology at the Department of Biochemistry and Biophysics at that same university. Elizabeth H. Blackburn has received numerous honors and scientific awards for her work on telomeres and telomerase, including the Albert Lasker Award for Basic Medical Research 2006 (together with Carol Greider) and the L'Oréal/UNESCO Prize “For Women in Science". Elizabeth H. Blackburn became an American citizen in 2003 and in 2007 was listed by Time Magazine as one of the “100 Most Influential People in the World".

Professor Carol Greider, born in San Diego, California, USA, on April 15, 1961, grew up in Davis, California and studied biology at the University of California, Santa Barbara. She made her seminal discovery of telomerase while researching telomeres as a graduate student with Elizabeth Blackburn at the University of California, Berkeley, where she completed her Ph.D. in 1987. She has been Daniel Nathans Professor and Director of the Department of Molecular Biology and Genetics at The Johns Hopkins University in Baltimore since 1993. She has received numerous honors and scientific awards for her work, including the Albert Lasker Award for Basic Medical Research 2006 together with Elizabeth Blackburn.