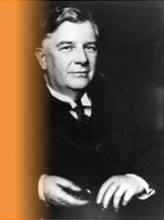 As early as 1922, Richard Wilhelm had been awarded an honorary doctorate degree by Frankfurt University. In 1924, he became honorary professor at the university and at the same time was entrusted with teaching Chinese studies. Richard Wilhelm aimed at founding a “Chinese Cultural Institute,” in which he would be able to put into practice his ideas on cultural exchange. And indeed, within one year, Wilhelm was able to find Countess Bertha von Francken-Sirestorpff, member of a wealthy industrialist family, as donator, not only supporting the founding of the China Institute but also of Wilhelm’s teaching assignment at the university. Wilhelm subsequently was able to win over more than a hundred personalities from society for supporting the China Institute. This enabled the institute and Frankfurt sinology to unfold its influential and widely acknowledged activities. Soon the China Institute began publishing a Chinese-German almanac and later on the journal Sinica, which was to become one of the most important German sinological journals. Once the China Institute had been successfully established, Wilhelm asked Frankfurt University to officially acknowledge the Institute as “Seminar for Chinese Studies at Frankfurt University,” which the university´s leadership did after Wilhelm had assured that Seminar and Institute would support themselves financially by their own means. Already during this early stage, Frankfurt sinology had an impact beyond its more limited realm. Wilhelm, for example, was one of the advisors of Karl August Wittfogel’s dissertation, which in 1931 was published in extended form as Wirtschaft und Gesellschaft Chinas (Economy and Society of China) and which created an international stir. Willy Hartner, who later on would become an extraordinary important historian of science, also developed a close relationship to Frankfurt University’s Chinese studies and published – partially in collaboration with Richard Wilhelm – on traditional Chinese astronomy.

Beginning with the world economic crisis of the late 1920s, the financial situation of the China Institute became ever more complicated and Sinology was only able to survive by accepting grants from the state. The death of Richard Wilhelm in 1930, however, resulted in an immediate threat of the closing of the institute. A magnanimous grant of the Chinese Guomindang government made it possible to preserve the professorship and the institute, so that Frankfurt sinology continued to exist.