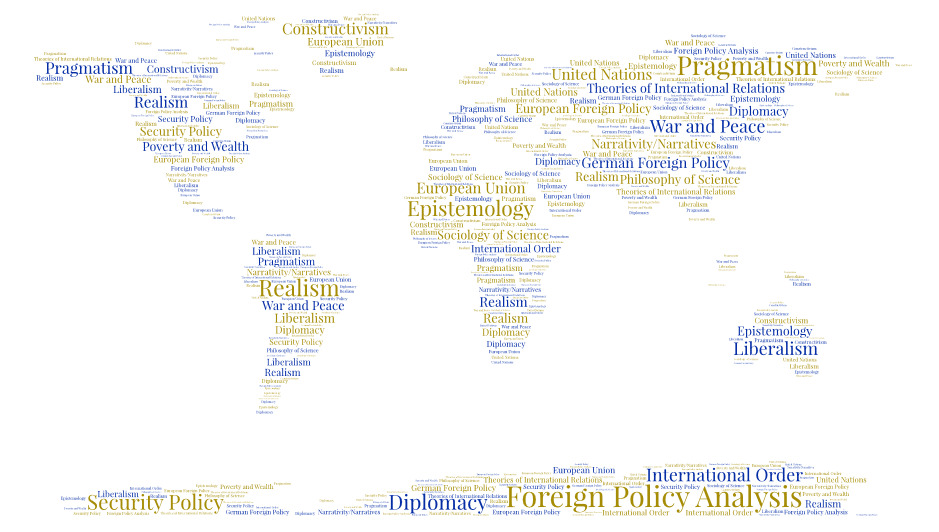 Widespread uncertainties in world politics have led to multilateralism once again assuming a central role in the communication of German foreign policy as well as increasingly also in academic discourse in International Relations.

The research project "Multilateralismus weiter denken" at Goethe University Frankfurt seeks a fundamental re-construction of multilateralism as a core concept of international cooperation. At the same time it also samples out concrete instances of of multilateral coalitions, conventions and cooperation in case studies and analyses them with a view towards success factors and incentives for successful multilateral action.

Biden, EUrope and the Challenges of Managing the Strategic Rectangle with China and Russia

Despite continuing political differences, the first 100 days of the Biden administration have shown that the much hoped-for appreciative style of communication has returned to the transatlantic relationship. At the same time, the regained unity of the West pits it even more clearly against rising (and declining) authoritarian powers. An analysis of the ‘strategic rectangle’ of the USA, EUrope, China and Russia allows – especially in a historical and a future-oriented strategic perspective – to identify opportunities and potential stumbling blocks for common strategy-building within the West. Weiterlesen

"Inclusive and effective or exclusive and democratic?" A Reflection on the State of the Debate on Multilateralism in Germany

The plurality of contributions to the debate accompanying the upcoming publication of the German government´s "White Paper on Multilateralism" showcases some of the difficulties and apparent trade-offs for a German foreign policy aimed at strengthening the multilateral order - not least among them the emerging divide between "exclusive" and "inclusive" interpretations of multilateralism regarding its relationship to democratic values. Weiterlesen

This Report summarizes the findings of a research project conducted with the support of Gerda Henkel Foundation at Goethe University and a workshop on strategy formation jointly organized with the Bundesakademie für Sicherheitspolitik (BAKS) in 2018. It brings together policy makers from the fields of German foreign and security policy with journalists and academics to reflect on the lessons learned from the strategy-making process in the context of the 2016 German White Paper.

Theorizing international relations presupposes a conception of what the subject matter and its bounds are. We have to have some idea of the entity at the center of our theorizing – the “international” or the “global”; “relations”, “systems” or “order”, just to name a few. Although it is a central category in political discourse and in the discipline of International Relations, the concept of order remains surprisingly undertheorized. This volume offers different contemporary perspectives on theorizing global order.

Uses of the 'West'

Uses of the 'West'

Uses of the 'West'. Security and the Politics of Order.

The notion of 'the West' is commonly used in politics, the media, and in the academic world. To date, our idea of 'the West' has been largely assumed and effective, but has not been examined in detail from a theoretical perspective. Uses of 'the West' combines a range of original and topical approaches to evaluate what 'the West' really does, and how the idea is being used in everyday political practice. This book examines a range of uses of 'the West', and traces how 'the West' works in a broad array of conceptual and empirical contexts, ranging from the return of geopolitics - via a critical review of the debates surrounding Samuel Huntington's Clash of Civilization thesis - to the question of the future of 'the West'. Analysis extends further to the repercussions of the war on terror on Western democracy and the processes of delineating the Western from the non-Western, as well as observations of the institutional transformations of Western order.

The Transformation of Foreign Policy. Drawing and Managing Boundaries from Antiquity to the Present

The study of foreign policy is usually concerned with the interaction of states, and thus with governance structures which emerged either with the so-called 'Westphalian system' or in the course of the 18th century: diplomacy and international law. As a result, examining foreign policy in earlier periods involves conceptual and terminological difficulties, which echo current debates on 'post-national' foreign policy actors like the European Union or global cities. This volume argues that a novel understanding of what constitutes foreign policy may offer a way out of this problem. It considers foreign policy as the outcome of processes that make some boundaries different from others, and set those that separate communities in an internal space apart from those that mark foreignness. The creation of such boundaries, which can be observed at all times, designates specific actors - which can be, but do not have to be, 'states' - as capable of engaging in foreign policy. As such boundaries are likely to be contested, they are unlikely to provide either a single or a simple distinction between 'insides' and 'outsides'. In this view, multiple layers of foreign-policy actors with different characteristics appear less as a modern development and more as a perennial aspect of foreign policy. In a broad perspective stretching from early Greek polities to present-day global cities, the volume offers a theoretical and empirical presentation of this concept by political scientists, jurists, and historians.

In an increasingly globalized world, the classic images of foreign policy as a political practice conducted by sovereign states has become increasingly inadequate. However, rather than tackling the transformation of foreign policy as a process of both scholarly and immediate political interest, foreign policy analysis and International Relations theory have become separate fields of study over the past decades, co-existing in a state of mutual and more or less benign neglect. InTheorizing Foreign Policy in a Globalized World, prominent authors address this issue, offering solutions to the analytical deadlock that are both provocative and innovative.

Since the 1980s, the discipline of international relations has seen a series of disputes over its foundations. However, there has been one core concept that, while addressed in various guises, had never been explicitly and systematically engaged with in these debates: the human. This volume is the first to comprehensively address the topic of the human in world politics. It comprises cutting-edge accounts by leading scholars of how the human is (or is not) theorized across the entire range of international relations theories, old and new. The authors provide a solid foundation for future debates about how, why and to which ends the human has been or must (not) be built into our theories, and systematically lay out the implications of such moves for how we come to see world politics and humanity's role within it.

You can use "doodle" to inscribe for the office hours: http://doodle.com/fii8yreg7bct8zpw . Your name is only visible for me.

You can use "doodle" to inscribe for consultation hour. Your name is only visible for Prof. Hellmann.

For consultation hour with other research associates and lecturer, please contact by email (see Team).