Prize Winners of the Paul Ehrlich and Ludwig Darmstaedter Prize 2019 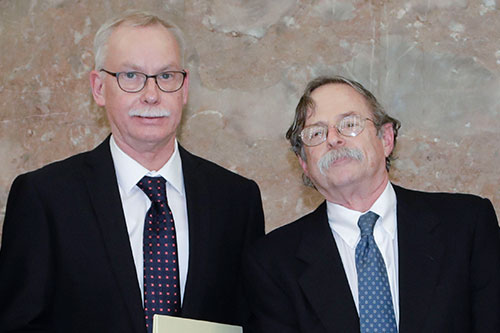 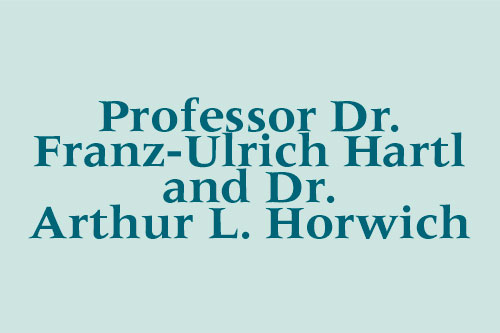 To find their correct and energetically favourable shape in the cell, newly synthesised proteins need help. They can only master such molecular origami with the assistance of folding helpers, of which there are several variants. Franz-Ulrich Hartl and Arthur L. Horwich have discovered this folding machinery, decoded its principles and demonstrated its significance for medical science. In many neurodegenerative diseases, misfolded proteins clump together and aggregate as protein waste in the cell. This is the case, for example, in Alzheimer's disease, Parkinson's disease or amyotrophic lateral sclerosis (ALS). The two prizewinners are currently working to understand the role that errors in the folding process play in these diseases and what can be done to remedy them.

Proteins are the cell's workhorses. However, to perform properly they must not only be assembled but also folded in the right way because they can only function in their correct, three-dimensional shape. In view of the many molecules in the cell, correct folding is, however, no simple task. A mammalian cell contains around ten to twenty thousand different proteins, which occur in a total concentration of 300 to 400 grams per litre. This equals a protein concentration five times higher than the protein concentration in blood. In this jostle, proteins can collide or remain stuck in an energetically unfavourable position during folding, from which they cannot easily escape. Conditions in the cell are similar to those on an overcrowded train: There is no room to turn round. The chaperones discovered by Hartl and Horwich shield the long protein chains from their surroundings, thus giving them the opportunity to assume their final shape quickly and without interference.

Extension of a dogma

The prizewinners' discoveries were initially anything but obvious. Essentially, in the 1980s it was thought that the riddle of protein folding had already been solved. Twenty years earlier, Christian Anfinsen had shown in in vitro experiments that some proteins fold correctly, spontaneously and without any input of energy. For this he received the Nobel Prize in Chemistry in 1972. The amino acid sequence is enough to dictate the final shape – this was the dogma at the time. Anfinsen's doctrine posited that proteins fold into their correct three-dimensional shape solely on the basis of the structural information contained in the sequence of their amino acids. Although this is fundamentally correct, it is far more difficult to implement in the cell. For one, there is the unfavourable condition of the high protein concentration. In addition, proteins leave the site of their synthesis as a growing protein chain – they squeeze out of the ribosome a little like toothpaste from a tube. Thus, there is a risk that the growing protein chain will clump together before synthesis is completed. It can only fold completely after the last amino acid has been added to the growing chain.

There were several experiments that fuelled doubts about the ability of proteins to fold correctly in the cell without outside help. Walter Neupert and Gottfried Schatz had shown that proteins can only enter the mitochondria, the cell's powerhouse, in an unfolded state and then have to refold – however, how they do this was entirely unclear. In addition, Costa Georgopoulos had proven that phages – viruses that infect bacteria – cannot form new phages when infecting bacteria that lack certain proteins. Here too, the identity of these “helpers" was unknown. Moreover, the enzyme Rubisco, which plants use to convert sunlight and carbon dioxide into biomass and oxygen, was evidently also reliant on a helper protein during assembly.

At that time, Hartl was investigating the biochemical mechanisms by which proteins are transported into mitochondria, while Horwich was looking for a strain of baker's yeast in which transport is disturbed. A mutant sparked his interest. He joined forces with Hartl to identify the defect. In this mutant, the protein no longer functioned after migrating into the mitochondria. What had happened as a result of mutation? Was the transporter defective or was the protein stuck in the membrane? Together, the two prizewinners showed that although the mutant found by Horwich did indeed transport proteins into the mitochondria in an unfolded state, it was then no longer able to assemble them into functional proteins. The gene impaired by mutation must therefore disrupt a process, which, according to Anfinsen's rule, should take place spontaneously and without external help. Indeed, further experiments by Hartl and Horwich proved the existence of a folding helper protein that was rendered inactive by the mutation. In so doing, they extended Anfinsen's dogma of protein folding to include the existence of chaperones.

Safety in the folding cage

Horwich isolated the mutant gene and showed that it was the same as the Hsp60 gene discovered earlier by another research team. It then gradually became clear that Hsp60 is part of an extremely complex folding machine, which is present, with smaller variations, in all living organisms and thus offers the proteins the necessary protection. In so doing, however, it also consumes energy. This service, which is important for survival, is therefore not available to the cells free of charge.

How does Hsp60 work? Hartl delivered biochemical and electron microscopy data, Horwich, together with Paul Sigler, X-ray images of the folding process. The outcome was the following picture: Hsp60 is part of a folding cage composed of two superimposed rings that resemble the shape of doughnuts. The cage created by the superimposition of these rings is closed at the top and bottom by a cap. The cage recognises the unfolded proteins by their sticky, hydrophobic surfaces, which in correctly folded proteins face inwards and are hidden by the correct three-dimensional structure. Because the cage itself has a sticky, hydrophobic surface, it reaches out for the sticky side chains of unfolded proteins and entices single protein chains into the cage. Then the cap closes.

When the cap is shut, the cage changes shape. It widens and no longer holds the long protein chain tightly, but instead gives it the opportunity to turn in all directions and fold freely, without the disruptive influence of other proteins. After a while, the cap opens again, and the protein is released to the outside. If it has not yet folded correctly, it is allowed back into the cage and given another chance to assume its final, energetically favourable shape. This takes place until it has found its correct form or is singled out as unusable. If the latter is the case, it is shredded, and the amino acids are recycled by the cell.

However, not only the mitochondria use folding helpers. In the cytoplasm, Hsp70 is active, among others. This chaperone also binds sticky, hydrophobic protein chains. Hartl has shown that Hsp70 is part of a machinery that meets growing protein chains during their synthesis and ensures that they do not become entangled before they have had an opportunity to fold properly. Hsp70 separates the sticky parts from each other and shields them. If the newly synthesised protein requires further help with folding, Hsp70 guides the unfolded chain through various interim stages to a folding cage in the cytoplasm, where – secluded and undisturbed – it can assume its final shape.

Ill as a result of misfolded proteins

The two prizewinners' research work is of great significance for medical science. Misfolded proteins pose considerable difficulties for the cell. On the one hand, they do not function properly and thus do not fulfil their tasks in the cell. As a result, the cell suffers from these malfunctions. On the other hand, misfolded proteins clump together because their sticky, hydrophobic surfaces attract each other and become entangled. In this way, large amounts of aggregates build up, which the cell can no longer dissolve. In many neurodegenerative diseases, such as Alzheimer's disease, Huntington's disease, Parkinson's disease and amyotrophic lateral sclerosis, such aggregates occur in the form of plaques or other deposits. Hartl and Horwich want to understand why proteins misfold in these neurodegenerative diseases, which toxic effects these misfolded proteins might have in the cell, and the role played there by the chaperones. Horwich is studying this in amyotrophic lateral sclerosis, Hartl above all in Parkinson's disease, Huntington's disease and Alzheimer's disease. In addition, both prizewinners are investigating whether misfolding in these diseases can be prevented through the provision of more chaperones. Perhaps a larger number or more active folding helpers could represent a potential therapeutic approach in these diseases.

More about the winner of the Prize for Young Researchers 2019 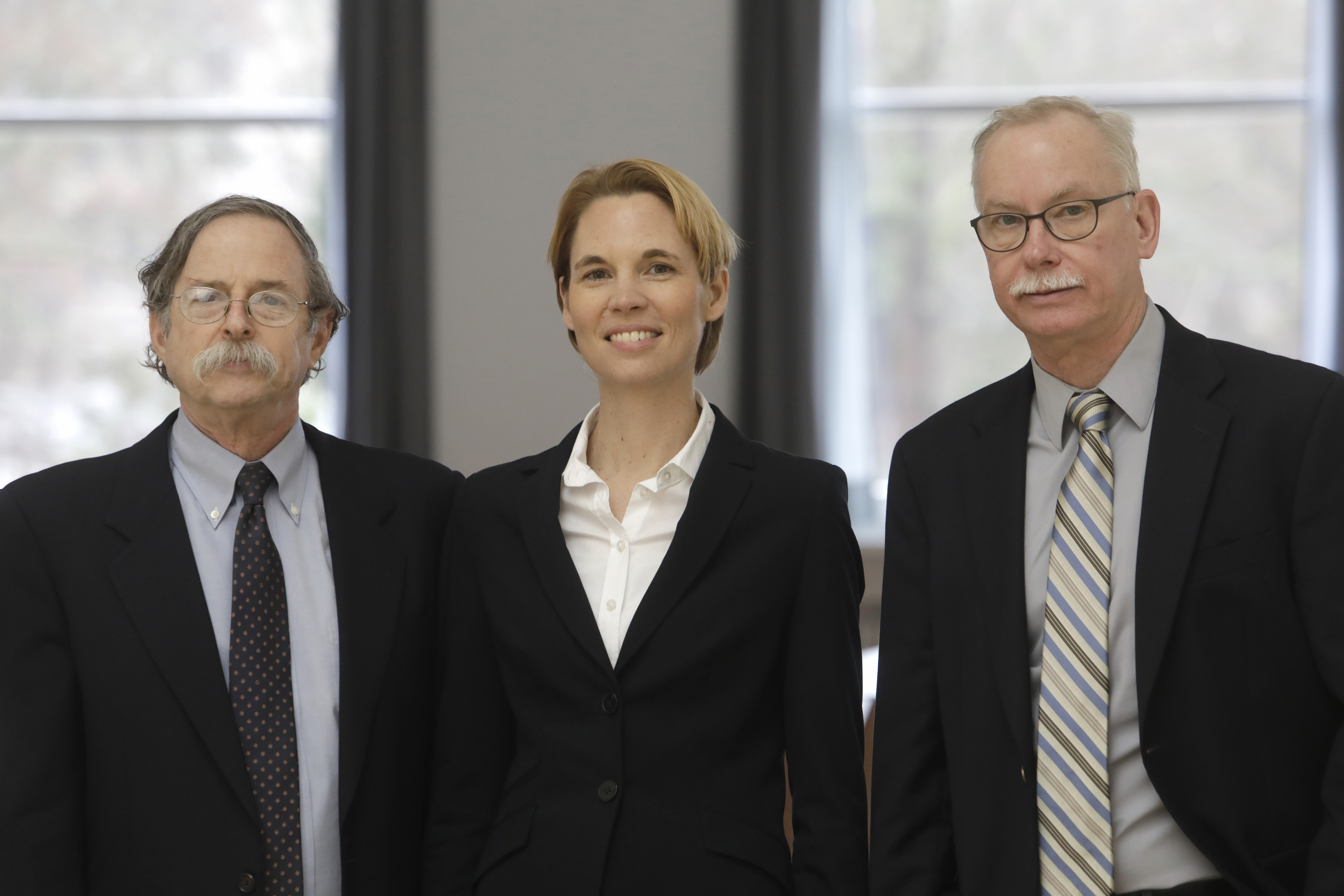