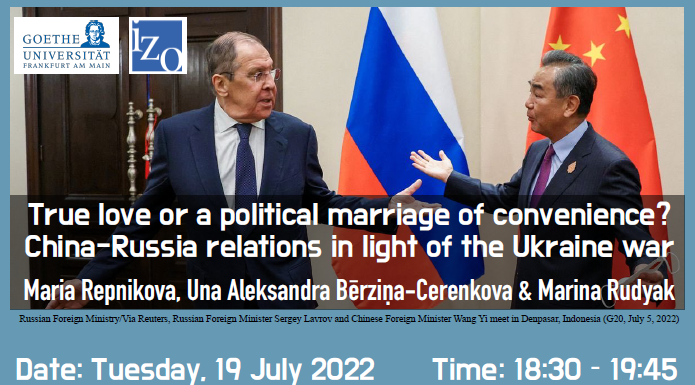 "True love or a political marriage of convenience? China-Russia relations in light of the Ukraine war"

The entire online event was recorded and is available on Youtube.

China and Russia have declared a friendship “without limits" and with “no forbidden areas". Chinese official rhetoric appears largely supportive of the Russian legitimisation of the war on Ukraine. But does China really support Russia unconditionally? What can we read between the lines, and how are Russia and the Russian-Ukrainian war discussed in inner-Chinese spaces (in Chinese, not directed at foreigners?) And what role is there to play for Europe?

The IZO is glad to host a virtual conversation on these questions between IZO member Marina Rudyak (Goethe University Frankfurt/Heidelberg University), Maria Repnikova (Georgia State University) and Una Aleksandra Bērziņa-Čerenkova (Riga Stradins University). While observing China-Russia relations from Western Europe, the United States and Eastern Europe, respectively, what all three have in common is that they were born in the former Soviet Union. Their knowledge of both Chinese and Russian political di