The IZO research focuses on East Asian regional studies, which concentrates on the modern cultures and societies of China, Japan, Korea and Southeast Asia, including their historical foundations, from an interdisciplinary, transregional and comparative perspective. In recent years, third-party funded projects have been successfully acquired that accentuate these approaches. The Centre's own publication series can be found under Publications. 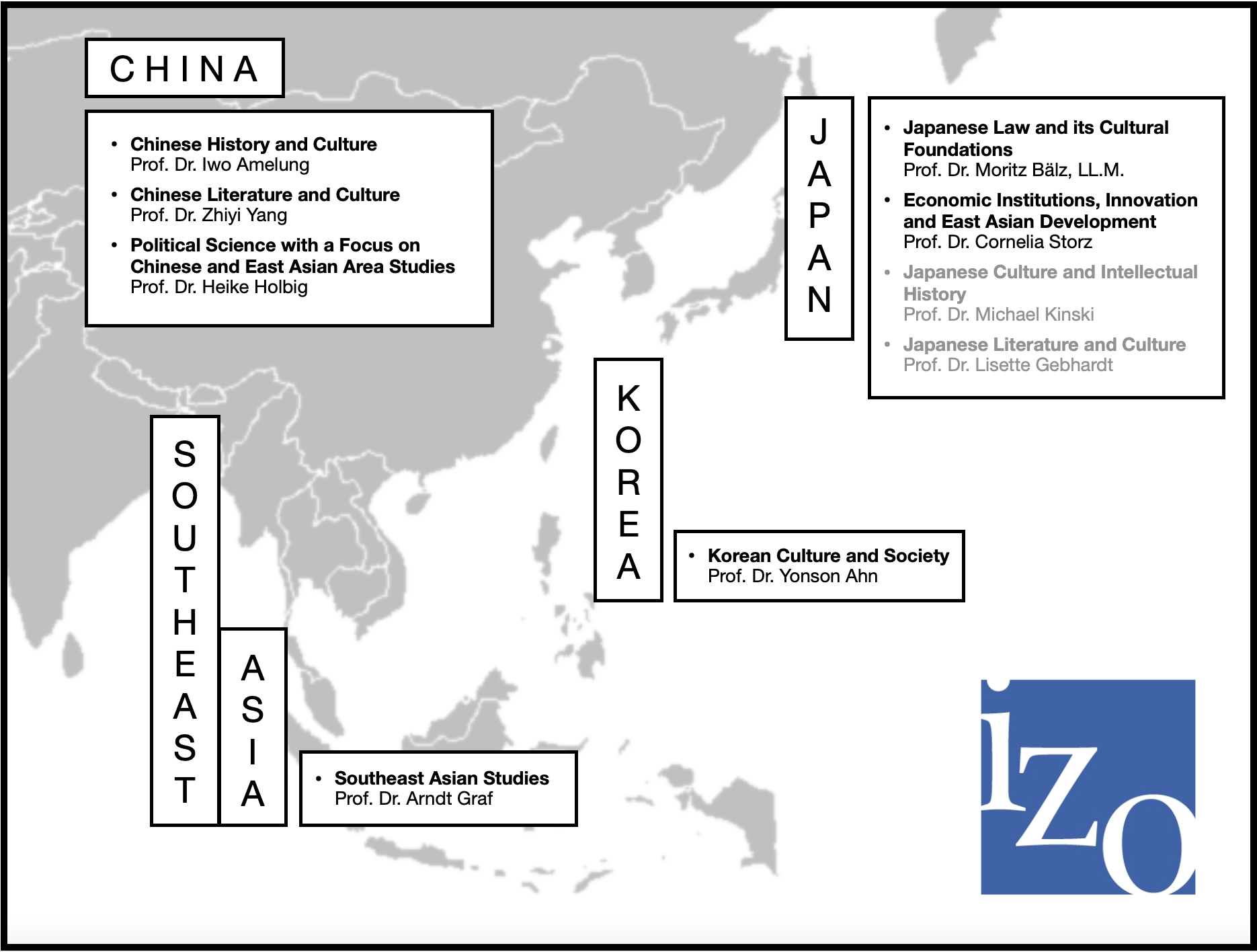 The IZO applies a wide range of approaches in its research work on East Asia. They can be related to individual cultures or to specific regions, they may be methods of philology, history or cultural studies, or they may be those of sociology, law studies and economics. Research at the IZO follows primarily the guiding concept of “Global East Asia – Past and Future". The idea is to study East Asian societies and the ideological, material, social, economic and political interconnections, interactions and exchanges which link them with each other and with regions in other parts of the world. These processes of interaction are considered in their historical context. The investigation of socially constructed connectivities that are empirically accessible permits the analysis of contemporary issues as well as a perspective on future developments. This is an essential condition for the drafting of strategies for dealing with the global and regional challenges of our time.

The IZO is in regular contact with the international community of researchers working on East Asia and cooperates with a great number of academics and academic institutions in East and Southeast Asia. Its courses aim to develop skills in linguistic, cultural, sociological, economic and legal matters relating to East Asia, mainly through academic teaching, but it also addresses a wider public. Last but not least, the IZO combines theory formation and knowledge derived from research with practical experience, especially through cooperation and exchanges with institutions and representatives from the cultural, economic and political sectors.

Consequently, the central objectives of the Centre are: 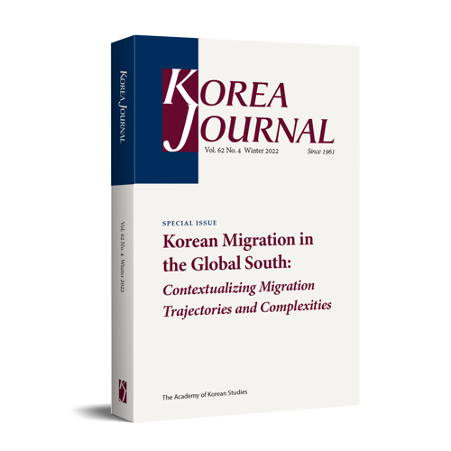 In two recently published articles in the Korea Journal, Yonson Ahn and Jihye Kim explore the under-researched field of Korean Migration in the Global South. ​Heike Holbig on the Canonisation of Xi Jinping Thought 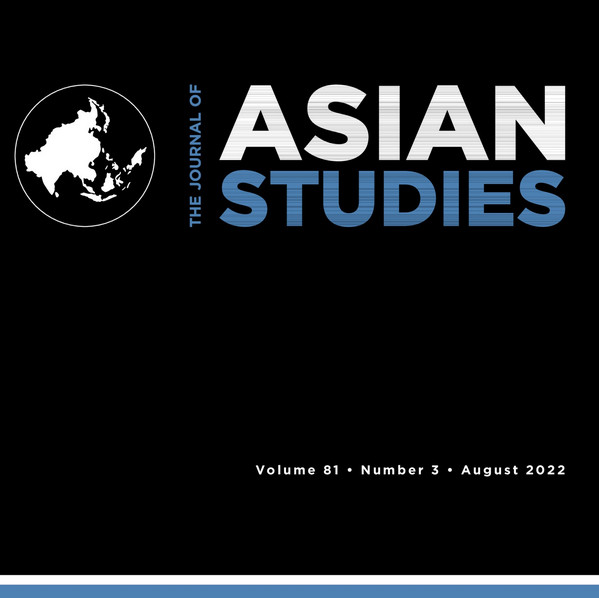 ​Sinophone Classicism: Zhiyi Yang on Chineseness as Temporal and Mnemonic Experience in the Digital Era

Prof. Zhiyi Yang elaborates on the concept of "Sinophone Classicism" in a new article in the Journal of Asian Studies, published in online first format by Cambridge University Press in June 2022. 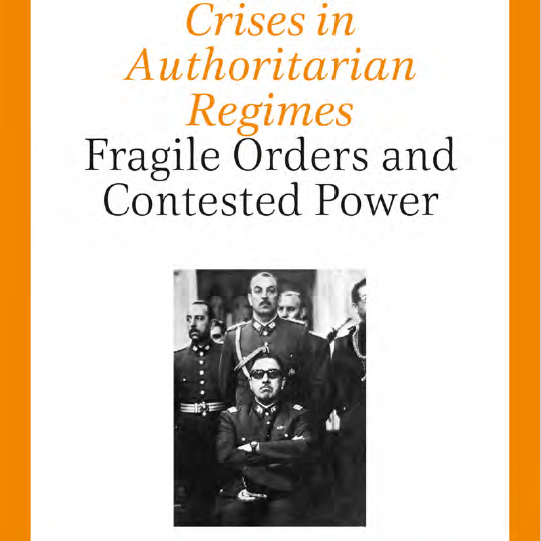 IZO Coordinator Bertram Lang has published a contribution in a new edited volume on Crises in Authoritarian Regimes by Jörg Baberowski and Martin Wagner.

Since the founding of the IZO, joint third-party funded projects have repeatedly been successfully acquired, within the framework of which the joint research work between the participating professorships and the cooperation with external partners in project networks have been further intensified. The BMBF is currently funding two large joint projects in which the IZO is significantly involved: QuaMaFA and CEDITRAA. Another joint research project on canonization and innovation in East Asia is in the application phase. 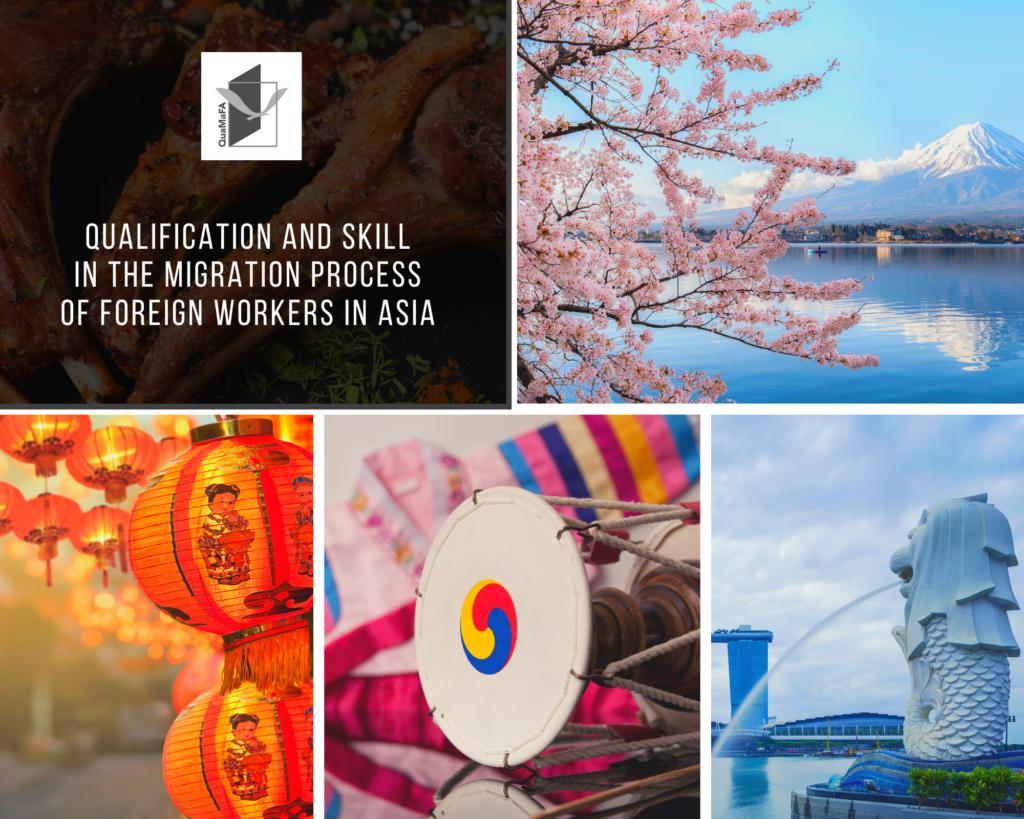 IZO is pleased to announce that another project has been approved for which the former IZO coordinator Dr. Ruth Achenbach successfully secured funding in 2020.

On 1 March 2021 the new joint IZO project “Qualification" in the migration process of foreign skilled workers in Asia (QuaMaFA), led by Dr. Ruth Achenbach, will get under way. The project, designed to run for four years, will receive funding of over 2 million Euro from the BMBF, more than half of which is for activities at Goethe University. Joint partners are the Free University Berlin, the University of Duisburg-Essen and the Max Planck Institute for the Study of Religious and Ethnic Diversity.

For information about the ongoing project and the persons involved see the project website. 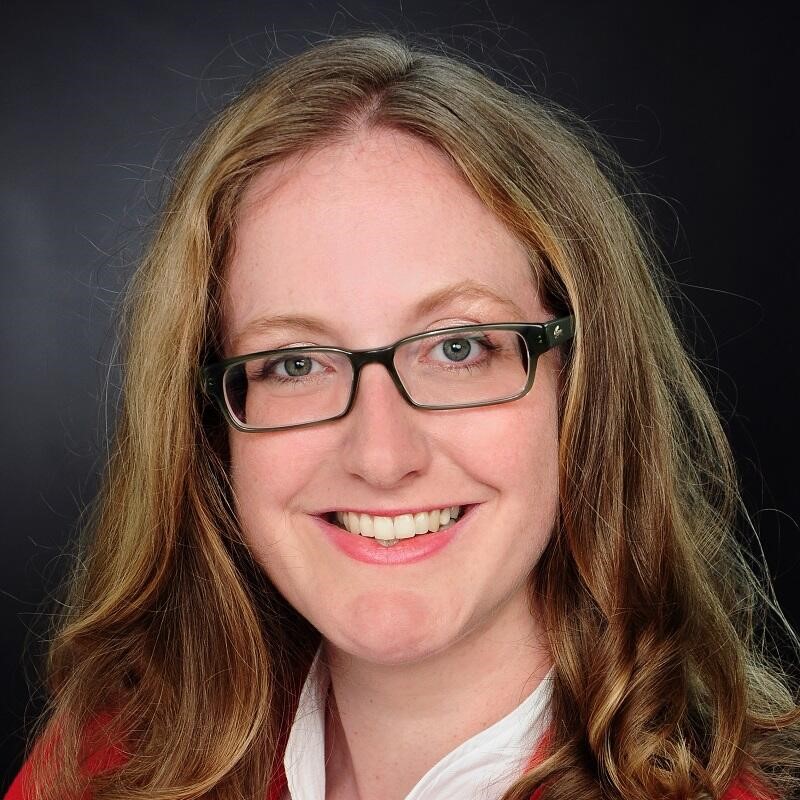 CEDITRAA – Cultural Entrepreneurship and Digital Transformation in Africa and Asia 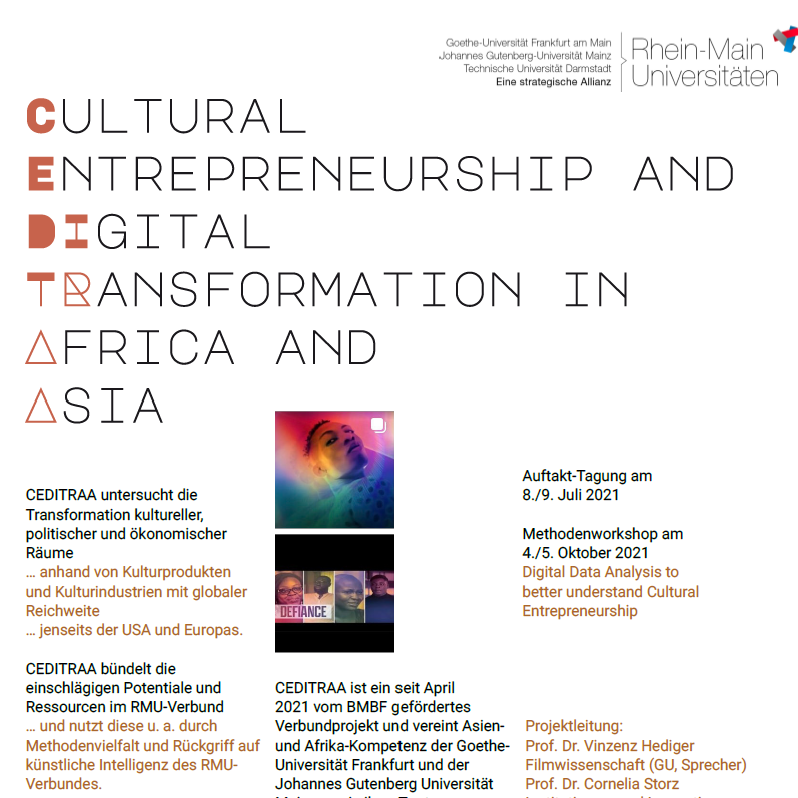 “Cultural Entrepreneurship and Digital Transformation in Africa and Asia“ is a joint research project of Goethe University, Frankfurt and Johannes Gutenberg University, Mainz. It analyses the changes brought about by digitalisation in cultural production in Sub-Saharan Africa and East Asia. The focus is on music and film as examples of immaterial forms of cultural expression. The object of research is cultural production in Nigeria and South Korea, two countries where the products of the US cultural industry are no longer dominant. The researchers from Frankfurt and Mainz are particularly interested in establishing to what extent the new cultural industries with a supra-regional range are becoming a factor in the economic development of their regions of origin.

For information about the ongoing project and the persons involved see the project website: www.ceditraa.net 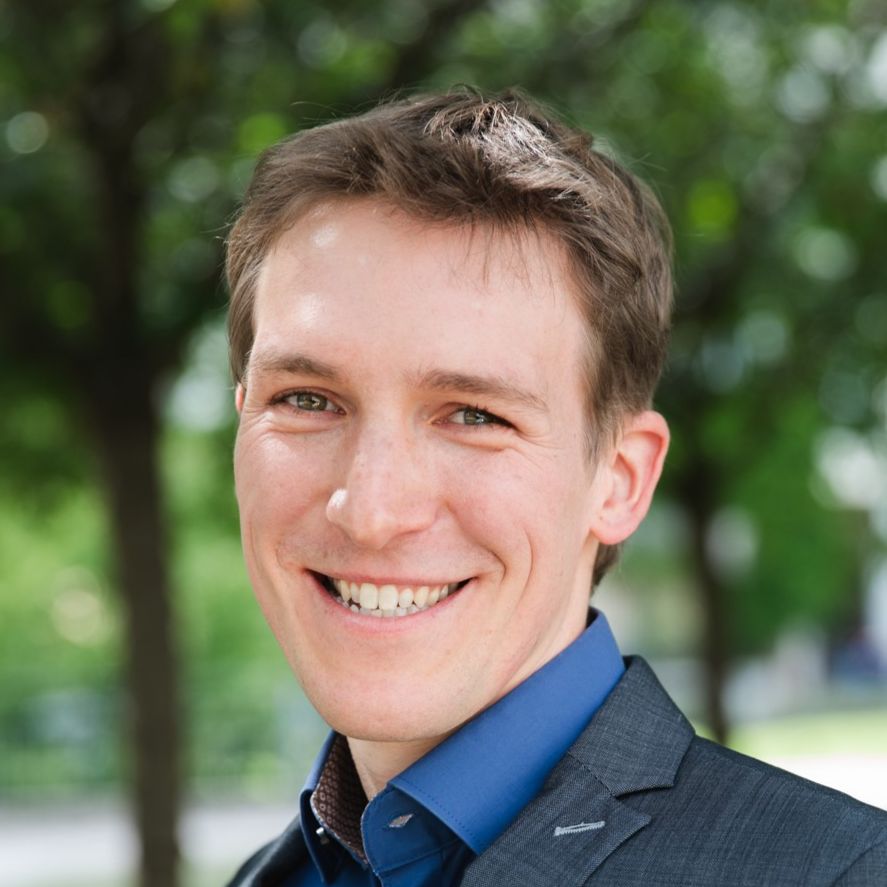 Project in the Application Phase 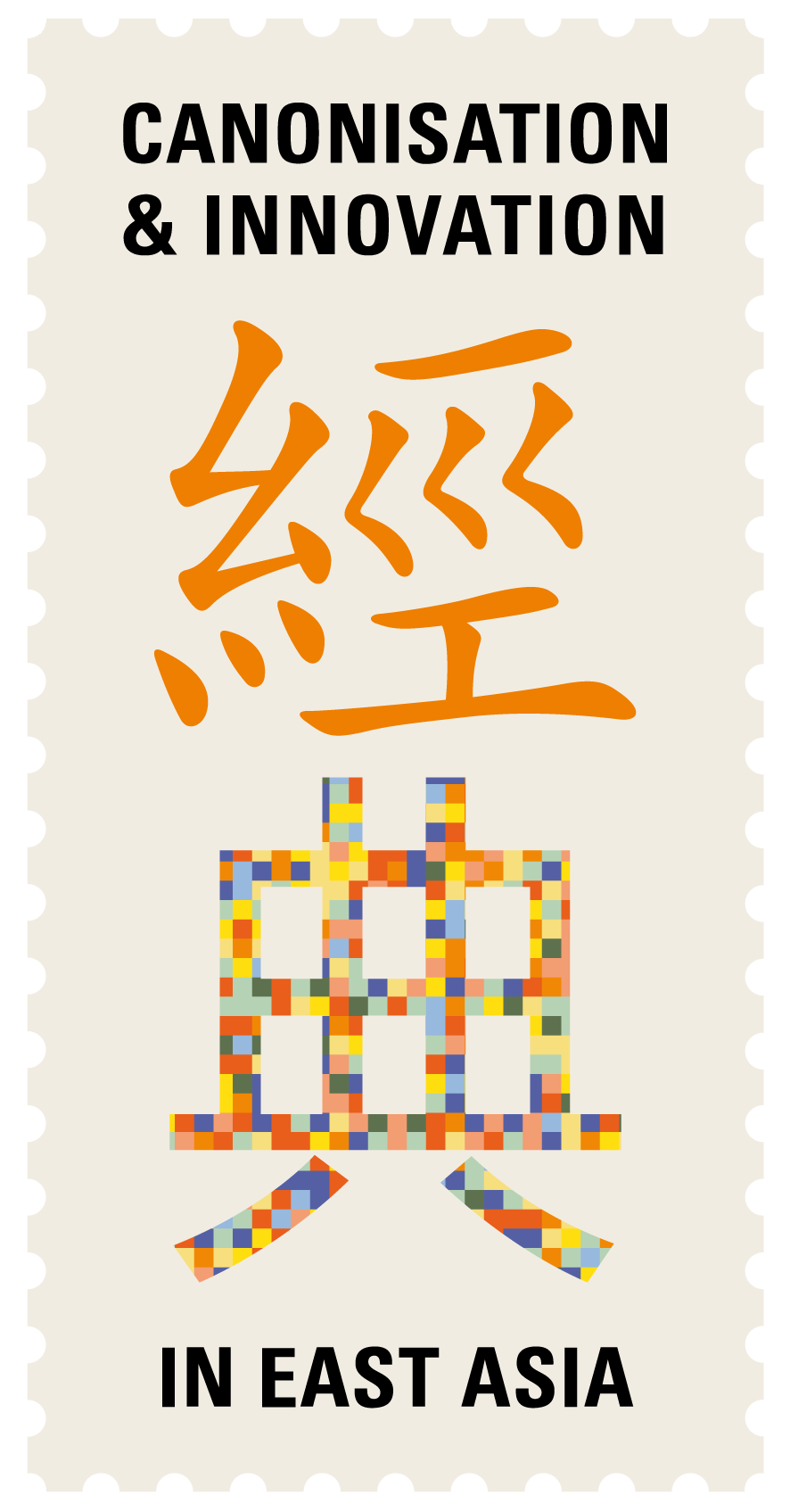 Several researchers at the IZO, led by its Managing Director Prof. Iwo Amelung, are preparing a research project on processes of canonisation and innovation in East Asia. Their starting point is the observation that traditional processes of canonisation in East Asia have become the object of much research, whereas the results of this highly productive research work are only rarely applied to processes of canonisation in contemporary East Asia. The basic tenet is that in principle every canon is an instrument of “compensation for contingency” with a stabilising effect. The processes of creating and preserving canons, i.e. the canonisations, on the other hand are characterized by a high degree of dynamism because they have to mediate between stabilising “fixed” canons and constantly changing social, cultural, political and economic circumstances; this is generally achieved by practices which can be described as “comments” as they appear in traditional processes of canonization. It is in this context that innovations occur, and the paradoxical relation between hostility to innovation and potential for innovation (Bahr) becomes evident. Canons always represent a “category of power” and canonizations can therefore be regarded as an exercise of power. This needs to be taken into account especially when analysing canonisations in areas as diverse as law, film, politics, gender, the military, literature and the sciences. The period under consideration will extend from the 19th century to the present. Work will make use of the methodical approaches and resulting theories of (mainly Western) research on canonization, but it is expected that an examination of the connection between canonization and innovation in East Asian canons will also prove productive. 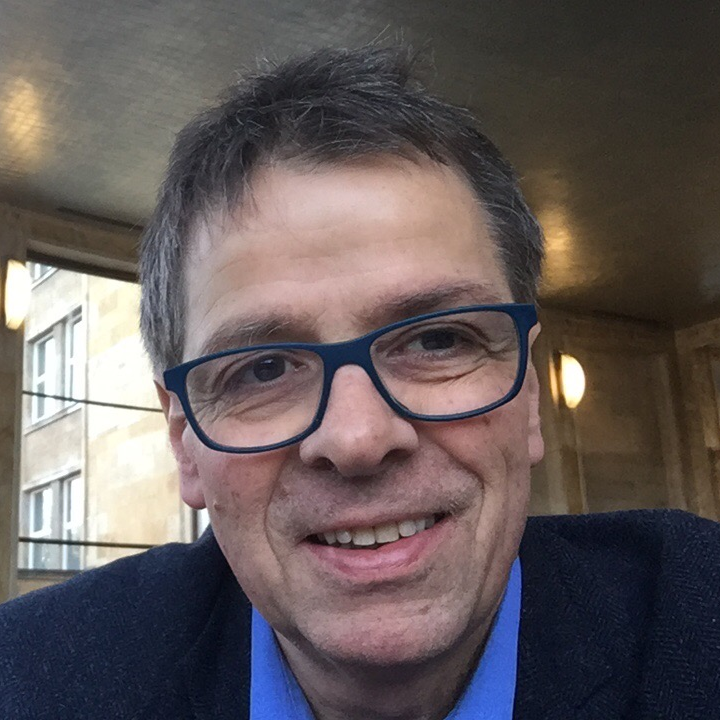 Protecting the Weak - Entangled Processes of Framing, Mobilization and Institutionalization in East Asia 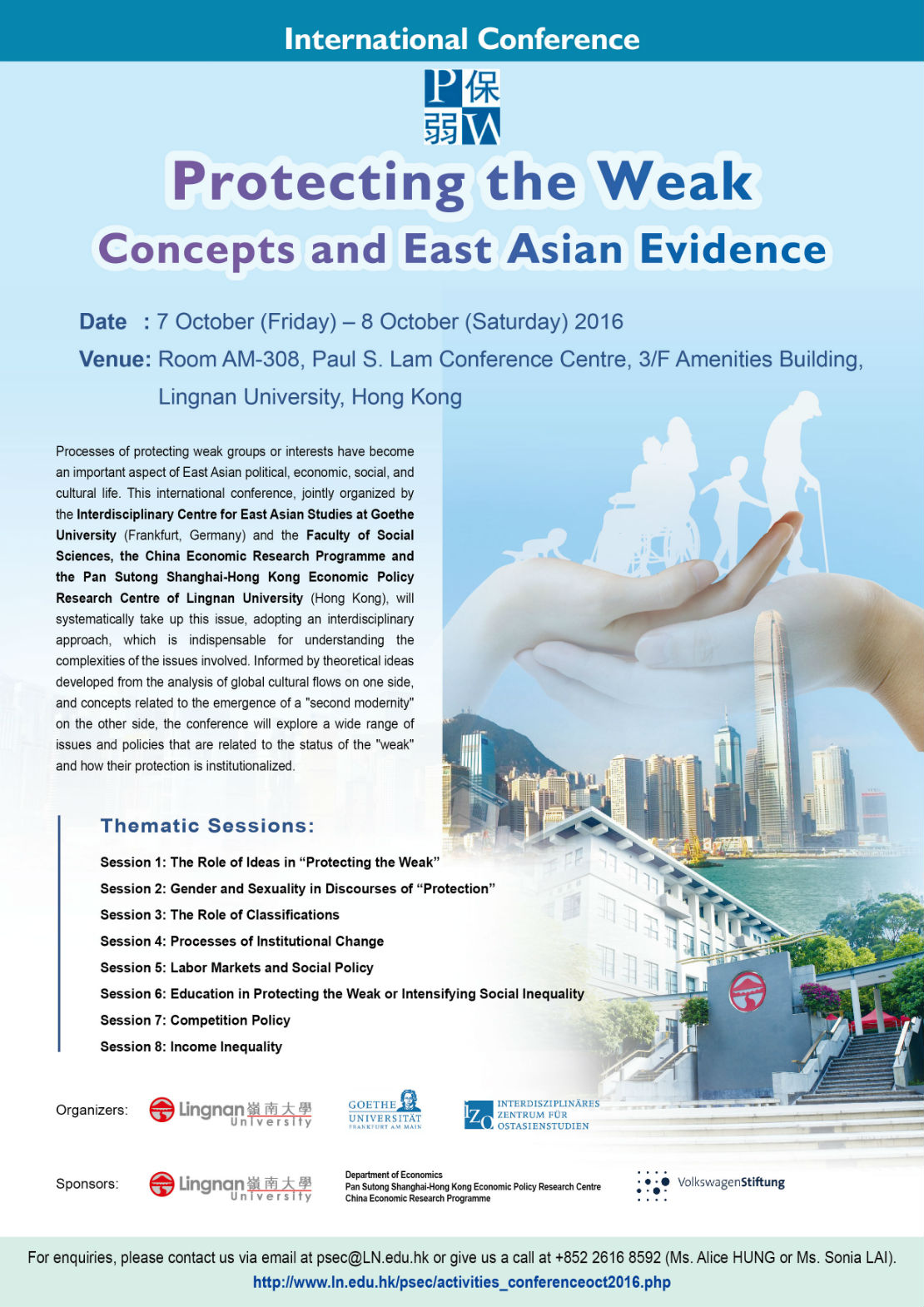 The researchers have investigated public claims for the protection of weak groups and interests in Japan and China from the nineteenth century to the present day. Taking an interdisciplinary approach, their research has engaged with ongoing global debates relevant to both Western and non-Western societies whilst also providing an historically informed analysis of contemporary issues. Using case studies on disaster victims, employee well-being, cultural heritage and animal welfare, the project has analytically distinguishes between framing, mobilisation and institutionalisation processes. These processes have been examined at the intersections of international and domestic spheres, demonstrates how drives for protection are formulated, contested and played out in practice. Ultimately however, the research team has shown that claims for protection do not always translate into effective measures, but may sometimes entail ambiguous or negative outcomes for the protected ‘weak’.

The findings of the five-year research project have been presented at multiple international conferences and published in dozens of journal articles and a collaborative monograph. As part of the Routledge Contemporary Asia Series, Protecting the Weak in East Asia. Framing. Mobilisation and Institutionalisation (2018) makes a contribution to the theoretical and empirical research into the transformation of East Asian societies. Moreover, four doctoral dissertations have been published by the team's junior researchers so far (Christina Maags - Political Science, Matthias Schumann - Sinology, Julius Weitzdörfer - Law, Na Zou - Economics), and the empirical research done by all team members has spun off into further research by graduate students at the IZO and the respective four faculties via conferences, teaching, and thesis supervision. 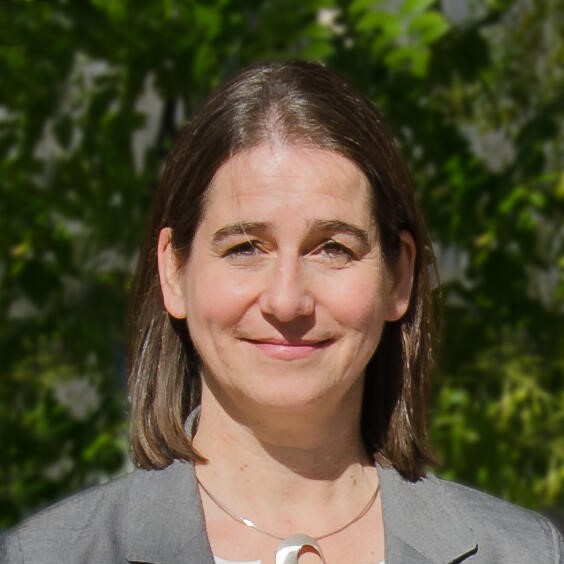 The Frankfurt Inter-Centre-Programme for new African-Asian Interactions is based on the premise that Area Studies in a globalised world are increasingly confronted with processes of deterritorialisation and transregionalisation. These processes have to be approached with new innovative concepts and theories in order to keep up with the continuously changing subject matter of African and Asian regional studies. The Frankfurt Africa-Asia Programme addresses this problem by focussing on new African and Asian interactions and is based on the assumption that these interactions – on the economic, political, social, and cultural level – are not only opening up new opportunities for Asian countries, but also for their African counterparts. In addition to China and India other countries such as Indonesia, Japan, Korea, Malaysia and Vietnam, whose relations to Africa have not received much attention yet, will also move into the focus of research.
Therefore, the Frankfurt Research Programme AFRASO will

Comparing Fukushima and Chernobyl: Social and Cultural Dimensions of the Two Nuclear Catastrophes 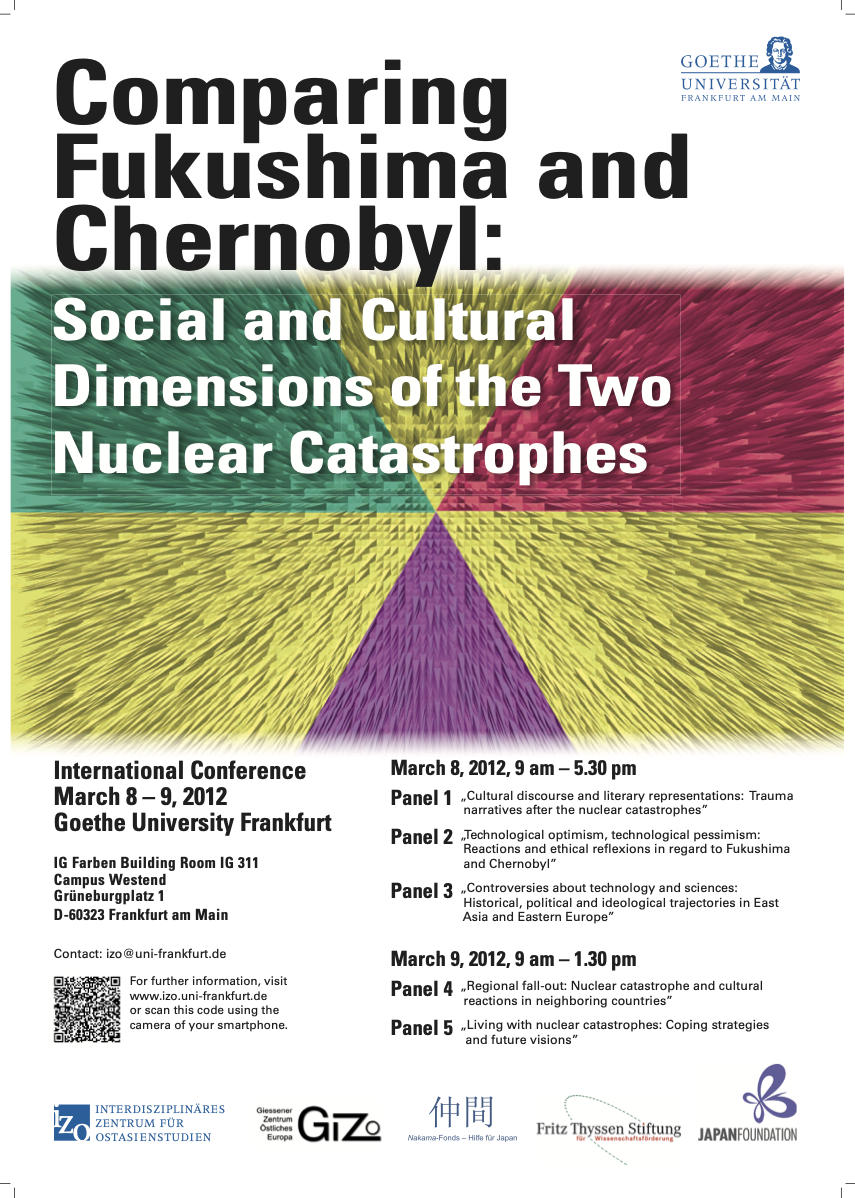 The inter- and multi-disciplinary project on “Fukushima and Chernobyl: Comparing the Social and Cultural Dimensions of the two Nuclear Catastrophes” aims at a comparison of two nuclear “accidents” which represent dramatic turning points in recent history. Specialists on Eastern Europe and Japan whose fields of research are philosophy, politics, sociology and human geography as well as media and literary studies look at the events from the perspective of their respective disciplines. Starting with a conference on the subject in March 2012, the goal is to analyse the role of the media and the reactions of intellectuals to the nuclear disasters in Russia (1986) and Japan (2011). Political and social developments in the post-Chernobyl and post-Fukushima era will also be discussed. At the core of the project are questions about the ethics of technology, a critical public and the re-politicizing of societies. Attention will also be given to the political and cultural conditions confronting possible initiatives for ensuring a sustainable future.

FrankAsia: 100 Years of Research into East and Southeast Asia in Frankfurt

In 2014 Goethe University celebrates its 100th anniversary. On this occasion IZO is making an enquiry into how East Asian and Southeast Asian Studies have developed in Frankfurt and who the persons involved in this process were. How have interpersonal dependence and connections impacted on research and how can this be verified? What exactly is the general influence of social, political and economic structures on the history of our subject and on individual research work in particular? How can this be demonstrated in the context of the history of East Asian and Southeast Asian Studies? These questions have a programmatic implication for the IZO as a whole, namely to determine on the basis of experiences in Frankfurt – from Richard Wilhelm and Otto Karow to the present day – the content and the significance of regional and area studies.